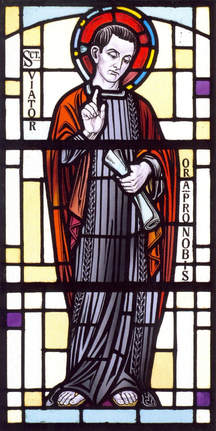 Our school is named for Saint Viator. The priest and brothers who are responsible for our school and for our parish are called Viatorians. The name Viator, in Latin, means traveler or wanderer. Viator was a simple Catholic person living in Lyons, France almost 1700 years ago. In the year 381 a man in the town where Viator lived ran through the streets waving a sword terrorizing the town's people. The man ran into the Church of the Macabees where Viator worked for Bishop Just. Viator was Bishop Just's faithful and loyal disciple. It is believed that the man ran into the church looking for a safe haven from the town's people. Bishop Just convinced the man to surrender to the authorities for trial. Unfortunately the man was killed by the angry mob before the authorities could give him protection. Feeling he had failed his calling, Bishop Just decided to leave France and exile himself to the Libyan desert in Egypt. Bishop Just and his faithful disciple Viator planned to live out their days as monks.

After about 100 years a group of followers of these two men became well known, in France, for preserving the relics and teachings of St. Viator. In 1830 Father Louis Querbes, from the Diocese of Lyons, chose Viator as the patron saint of a parish that would focus on teaching youth and serving the Christian Faith. This group was named The Clerics of St. Viator, now known as the Viatorians. The Viatorians have always been involved with teaching and education. There are Viatorians in countries throughout the world, bringing the Gospel and education to youths. In our country Viatorians came from Canada and settled primarily in a small town near Chicago in the late 1800's.


Over 50 years ago, while Las Vegas was still a growing town, the Catholic community asked if the Viatorians would send people to our town to help teach our Catholic youth. For many years the Viatorians were the main teachers in Bishop Gorman High School as well as St. Viator Parish school. We are very lucky to have been able to have the chance to learn from this special group of priests and brothers, and to follow their path of observing the Catholic faith and love of education.

On October 21st we celebrate the life of St. Viator and the group of faithful followers who have been inspired by this simple story.

Father Louis Querbes, founder of the Clerics of St. Viator, was born in France during the French Revolution. In 2004 formal petitions were made to the Cardinal Archbishop of Lyon asking that the Beautification Cause of Louise Querbes be introduced.